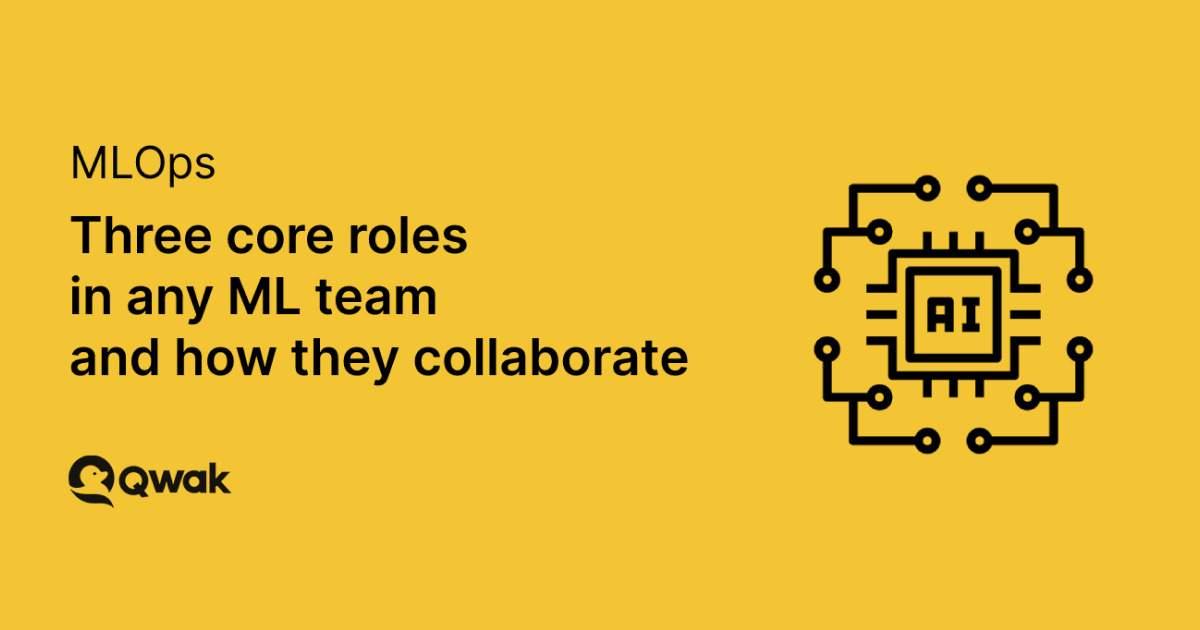 Three core roles in any ML team and how they collaborate

Developing successful machine learning projects requires a huge variety of expertise. It’s no longer the case that teams are made up of multitalented people with a do-it-all remit. That’s not to say that individuals with deep knowledge in various domains have disappeared, though.

Rather, it’s now the case that the need for data science has grown exponentially, and there is now a more pressing need for ML teams to be packed full of domain experts who focus on a single area, such as data science, data engineering, or machine learning engineering—these are the three core roles in any ML team.

While early machine learning and data science were entirely independent, it has quickly evolved into specialized work. Nowadays, it’s far more important for organizations to think about the competencies of a team rather than expecting all individuals within a team to be an expert in everything ML-related.

The same thing happened in software engineering where, over the years, roles have diverged into distinct areas: back-end, front-end, and DevOps to name the main ones.

Although machine learning has been around for a while now, there’s still some confusion that exists around job roles, titles, and the responsibilities that come with them. In this post, we’re going to look at the three main roles in the machine learning space, discuss what they’re responsible for, and look at how they collaborate.

The Three Main Roles in a Machine Learning Team

Each of these roles focuses on a different part of developing a machine learning system. While each role is specialized, there is some overlap between them. Let’s take a look at each of these in more detail.

Data is the foundation of machine learning—but we don’t need to tell you that!

In this role, data engineers work with data scientists around core data issues, such as data availability. This is because data scientists need to have access to data so that they can experiment with and train their models, and the data engineer is the person responsible for providing it.

In recent years, we’ve seen the emergence of feature stores. These act as a solution between data engineering and data science by consolidating data for machine learning in a centralized place. This allows data scientists to define data transformations for the ML model and deliver new features into the training pipeline without interruption.

Data scientists, also known as machine learning researchers, are the people responsible for working with data and building machine models. They can be seen as the brains behind an ML operation as they are the ones who clean and interpret data before building models using a combination of data and algorithms, which is their primary role. They are also the people who are tasked with finding data-driven solutions to business problems.

Nowadays, data scientists tend to come from the academic field and have backgrounds in university research roles. Due to academic breakthroughs in the AI and ML space, much more of their research is being applied more quickly to real-world applications, which is leading to the quick development of more complex ML solutions that, not too long ago, were thought of as impossible.

Although the primary role of a data scientist is to explore data and build models, cleaning data tends to be the most time-consuming part of their workflow. That’s why the feature store has emerged as a critical part of the modern end-to-end ML infrastructure.

Technologies that enable ML to be trained and served on the cloud aren’t usually part of the data scientist’s remit. As a result, ML engineers have emerged as the productization specialists for ML. To roughly describe the workflow, data scientists build and validate the model while engineers ensure it scales from a model to a production system.

Machine learning engineers can therefore be said to be the tinkerers, the builders, the hands-on people. They support the work of data scientists by taking their theory and applying it to the real world through building machine learning systems with their models and deploying them into production.

The typical machine learning engineer might do anything from setting up and managing data lakes to building easy-to-use computational clusters for training purposes. They will also be tasked with ensuring that there’s a high availability deployment of the models that they work with.

How do ML teams collaborate?

While the divergence of roles in machine learning is a good thing—after all, those who are specialists in their field are likely to be more productive in their work—it’s worth mentioning that teams need to adopt a platform approach rather than work independently as specialists.

Here are a few tools and platforms that can be used to achieve this.

It’s critical to thoroughly document everything because when working as a team (and potentially with other teams) you need a common source of truth and easy access to knowledge. ML teams will often create detailed documentation (e.g., business requirement documentation (BRD)) that outline the exact outcome and the objective of a certain project. This practice helps to get everyone singing from the same hymn sheet.

For instance, if a business wants to begin working on updating an existing recommendation system, they need to brainstorm the entire project. This might start with the status of the existing system, current metrics, problems that need to be solved, and who will work on the project. Tools like Slite and Notion enable users to create things like tables, Kanban boards, and checklists to build this documentation. Once everyone is briefed, roles can be assigned, everything can be signed off, and the project can begin.

If you’re a developer, we don’t need to explain code version control to you, and you’re guaranteed to already be aware of tools like GitHub and Bitbucket.

There are millions of open-source projects used by millions of developers around the world, and some of the more popular projects have hundreds, if not thousands, of contributors. Tools like GitHub and Bitbucket exist to make collaborating on code seamless by not only helping developers to push code but also handling CI/CD and facilitating collaboration on documentation.

The rapid growth in the importance of machine learning to businesses has made it more tedious, difficult, and, in many ways, dangerous for teams that must constantly bridge the gaps between data scientists and ML engineers.

This has led to the growth of end-to-end ML platforms like Qwak which automatically bridge this gap and handle the infrastructure needs of ML teams, giving them more time to focus on improving their ML models and delivering a better business impact with their ML systems.

Qwak’s very first mission statement was to help others take models to production and to do this quickly. Having accomplished this goal several times, we know that models in production should have more than just API access and monitoring capabilities. That’s why we built everything you need to make your production dreams come true, and we’ve made it accessible without having to invest exorbitant amounts of time and money.