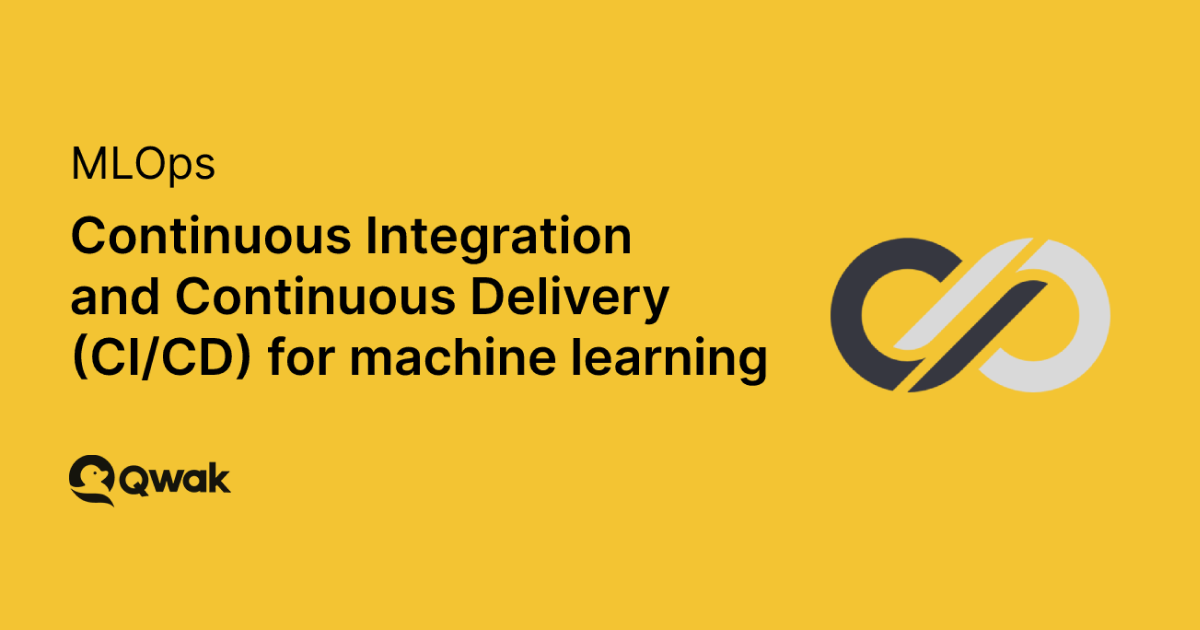 It is becoming increasingly common for DevOps methodologies to find their way into MLOps as the field continues to mature. One of the core concepts of DevOps that has done this and is subsequently helping to define the MLOps field is continuous integration and continuous delivery and deployment (CI/CD).

As a practice that sits right at the heart of DevOps, CI/CD embraces tools and methods for the continuous, reliable delivery of software applications by streamlining the building, testing, and deployment of applications to production.

Why CI/CD for machine learning is important

Machine learning model development can be a slow-burning process, with many manual steps that take time to complete and leave plenty of room for human error. This is a problem since in machine learning, it is critically important to be accurate and efficient when developing models to avoid problems such as training-serving skew and model bias.

It is for these reasons that CI/CD, and by extension DevOps and MLOps in general, is so important. A good CI/CD pipeline enables ML teams to streamline testing and deployment through automation, saving ML teams a lot of time while delivering a much better product.

Definition: MLOps is a core function of machine learning engineering that is focused on streamlining the process of deploying ML models into production. It is a collaborative movement that involves everyone from across the machine learning value chain to achieve this goal. Read more: The Ultimate Guide to MLOps Tools in 2022

Key elements of a CI/CD pipeline

A CI/CD pipeline is an automated system that, as we’ve briefly touched on, streamlines model development and deployment. CI/CD pipelines are used to build code, run tests, and deploy new versions of a model when changes are made. The testing portion of the CI/CD process is CI whereas the deployment portion is CD, since the pipeline is continuously deploying or delivering the model into production automatically.

Automated CI/CD pipelines eliminate errors, provide ML teams with standardized feedback loops, and allow for quicker model updates. All this together allows for major improvements to be made on traditional manual model development lifecycles. A typical CI/CD pipeline will be made up of four key stages: source, build, test, and deployment.

Let’s look at each of these in turn.

The typical CI/CD pipeline in MLOps will start with a source, such as a model code repository. When changes are made to a model’s code, this triggers the CI/CD system and tells it to kickstart the pipeline process. It’s also possible to set up pipelines so that they are automatically triggered by scheduled workflows, on command, or by other pipelines that are attached to the CI/CD pipeline.

To build a model that can potentially be deployed and used by end-users, code must be combined with its dependencies. This stage can vary depending on the language the program was written in since, for example, Python programs don’t need to be compiled whereas Java or Go ones do. In the case of MLOps, model training is also often part of the build stage.

The test stage is arguably the most important because it is the stage when automated tests are run to validate the code’s correctness and the performance of the model. Testing can last anywhere from seconds to hours depending on how large or complex a model is. For larger projects, tests tend to be carried out in multiple stages.

Deployment is the final stage. A model can only be ready for deployment when there is a runnable instance of the code that has successfully gone through the testing stage. Most projects will have more than one deployment environment (e.g., staging) and a production environment. The former is used to ensure that the model is deploying correctly whereas the latter is the final end-user environment where the ‘live’ model exists.

Monitoring is another important stage that comes after deployment. During monitoring, data is collected on model performance based on live data, and the output of this stage is a trigger to execute the pipeline or to execute a new experiment cycle.

Challenges in CI/CD for machine learning

First of all, since ML is experimental in nature, the model development process involves running ML experiments to determine things like the modeling techniques and parameter configurations that work best for a defined problem. The challenge here for teams is tracking the reproducibility of these experiments to make sure that they’re able to re-use the code and replicate the model’s performance on the same dataset.

The testing stage also presents more potential areas of complexity when it’s an ML system that is subject to the tests rather than a regular software system. This is because ML development involves data and models in addition to the source code, meaning that teams must test and validate both data and models to ensure that the ML system performs sufficiently.

Finally, deploying a machine learning system is not just about deploying a model that has been trained offline; it also requires the deployment of a multi-step pipeline that retrains and deploys the ML model prediction service into production. This separate pipeline requires teams to automate steps to train and validate new models prior to deployment, adding another layer of complexity when trying to achieve continuous delivery.

Benefits of a robust CI/CD pipeline

The main benefits of a robust CI/CD pipeline are:

CI/CD allows for each minor update to be deployed straight away rather than waiting for multiple changes to stack up before they are deployed. Because larger deploys are riskier, CI/CD also reduces the risk factor of each deployment.

Scale to meet demand in real-time

Traditional pipelines come with a limited capacity, however, serverless CI/CD pipelines scale their capacity up and down in response to project demands. This means that teams are only paying for what they’re using, meaning that they only use a small capacity for small projects but have the flexibility for high capacity when it’s needed on the fly.

CI/CD pipelines that have microservice architectures enable pieces of pipelines to be recycled and put together into new pipelines quickly, rather than having to re-write the same piece of code for each new pipeline.

In ML model development, a good deal of frustration can be caused by intermittent failures. A reliable CI/CD pipeline helps to eliminate this problem by always producing clean, identical outputs for each input.

Ready to get started with CI/CD for machine learning?

Implementing machine learning in a production environment is about far more than just deploying a model for prediction. Setting up a CI/CD machine learning pipeline enables ML teams to automatically build, test, and deploy new ML pipeline implementations and iterate quickly based on changes in data and business environments.

You can begin by gradually implementing CI/CD best practices in your ML model training and pipelines as a part of your MLOps processes to reap the rewards of automating your ML system development and operationalization—and you should do this with Qwak.