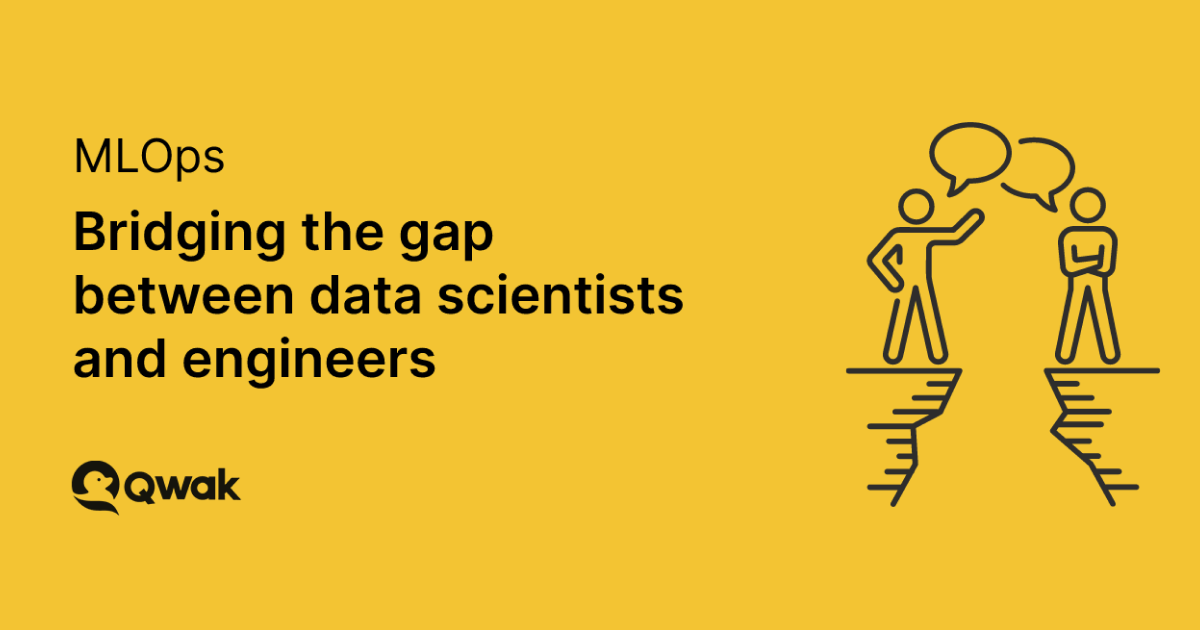 Bridging the gap between data scientists and engineers

All the buzz and hype surrounding ‘big data’ has created a major misconception: that the existence of data alone can provide a company with endless actionable insights and help to power decision making.

While it’s certainly true that big data can do this, the reality of the situation is a bit more complicated, and it certainly doesn’t happen automatically. To extract value from big data, companies need a capable team of data scientists and experts behind them to sift through the noise and pull the needles out of the haystacks.

Organizations do, for the most part, understand this, as illustrated by the huge growth in data science jobs between 2016 and 2019. Indeed, the job of ‘data scientist’ was (and in some cases, still is) thought by many to be one of the most lucrative job roles of the present day.

However, even with the most capable team of data scientists on your side, there’s still a major hurdle that needs to be addressed: putting the ideas and insights of big data into production in order to realize true business value. Although data scientists are invariably great at fetching data, working with it, making visualizations, and in some cases even building initial models, that’s as far as their role goes. When it comes to actually providing the model to end-users and integrating it with existing tools, that’s a job for engineers, and in order for engineers to do their job effectively, you have to ensure that your engineers and data scientists are working together in harmony.

The gap between data science and engineering

It’s true that data scientists are the innovators who extract new ideas and insights from the data that an organization collects on a daily basis. Engineers then step in to build on these ideas and create models that can be served to end-users.

Data scientists are the people who are tasked with manipulating and deciphering data to deliver positive business outcomes. To accomplish this, they carry out a wide range of tasks from data mining to statistical analysis. Collecting, organizing, and interpreting data is the name of the game, and this is all done in the hopes that they will be able to identify significant trends and new information.

Although engineers do work closely with data scientists, there are some major differences between the two roles. One of the most fundamental differences is that engineers place more value on the “productional readiness” of systems; engineers want their systems to be fast and reliable.

In other words, data scientists and engineers have two very different day-to-day priorities. This then raises a major question—how can organizations position both roles for success and extract the most meaningful insights from their data?

Here are five ways that organizations can do just that:

You can’t put your engineers and data scientists together and expect them to work together seamlessly and begin solving problems. You first need to get them to understand each other’s terminology and get them to speak the same language.

The best way to do this is through cross-training. By pairing individuals from the two teams together, you can encourage shared learning and begin breaking down barriers.

For data scientists, this means learning to write code in a more organized way, learning coding patterns, and building an understanding of the tech stack and challenges that are faced when introducing a model into production. It’s also a good idea for data scientists to learn and adopt engineering practices and standards and have an understanding of what it means for code to be part of the production environment.

Meanwhile, on the engineering side, one thing that’s really important for engineers to understand first is that although data science code may look similar to “classic” software development code, the concept is totally different. ML models change while they are in production and they are much more sensitive to data changes as a result, meaning they also need to be released and monitored differently.

When both teams are in sync with each other’s goals and workflows, it’s possible to begin fostering a more efficient machine learning development process (i.e., MLOps) and benefit from efficiency gains.

One of the best ways to get maximum value from code is to “productize” it and create an environment where both data scientists and engineers can lean on their strengths. This is what a “feature store” is for—a centralized location for storing documented features.

The purpose of a feature store is to feed data into machine learning algorithms, and one of the main benefits of using one is that it enables consistency between models. A good feature store can significantly increase the reliability and stability of algorithms while also helping to make engineering and data teas more efficient. When using a feature store, data scientists and engineers know that when they take a feature from it, the feature has been tested for reliability and won’t immediately break in production.

Version control is a system that records changes to a file or set of files over time. This makes it easy for teams to see specific changes and versions later on and is a total lifesaver for projects that have lots of individuals involved in them. In addition to version control, using Git also means that your code will be stored in the cloud and easily accessible by everyone working on the project. As a result, your teammates can be aware of what you are building and pick up where you left off.

When a project grows, it’s time to begin thinking about modularity. Indeed, for larger teams, it’s something that should be given serious thought prior to beginning a project. Splitting up work into steps and forming a pipeline is something that requires very little effort and will pay massive dividends in the future.

While working modularly means that you can only run and work with one module at a time, this makes it possible to see where any errors or bugs are, or where any bottlenecks exist, giving you the opportunity to solve them without having to comb through an entire model’s worth of code.

Modularity also helps teams stay organized and makes code easier to maintain. It also makes it much easier for engineers and data scientists to explain to one another how X or Y works on a higher level and focus on one thing at a time.

For data scientists, analyzing endless reams of big data can be a very messy and experimental process. This naturally leads to preliminary code that engineers might find difficult, if not impossible, to understand. If engineers begin to work from substantive code, their model software will more than likely run into problems such as instability and overall inefficiency.

That’s why prioritizing clean code is so important. Implementing standardization protocols that account for security considerations, data access patterns, and other factors can help keep both engineers and data scientists happy and speed up the development process. If your data team can consistently produce code that performs well within the development framework of engineering without sacrificing functionality, the entire process from idea to production will run more smoothly.

Bringing data and engineering together

The sudden and rapid proliferation of big data and machine learning has created many new opportunities for businesses, but it has also led to many new challenges that need to be overcome.

In order to extract full value from data, businesses must have strong data science and engineering teams behind them that are capable of working together seamlessly and efficiently. Only then will engineering teams be able to build on the valuable ideas and insights of data teams by creating powerful machine learning models that grow your bottom line.

To ensure that these two very different teams can work together well in the first place, organisations should take steps to ensure that the right training, processes, and tooling are in place and that data teams are fully embedded within the organization.