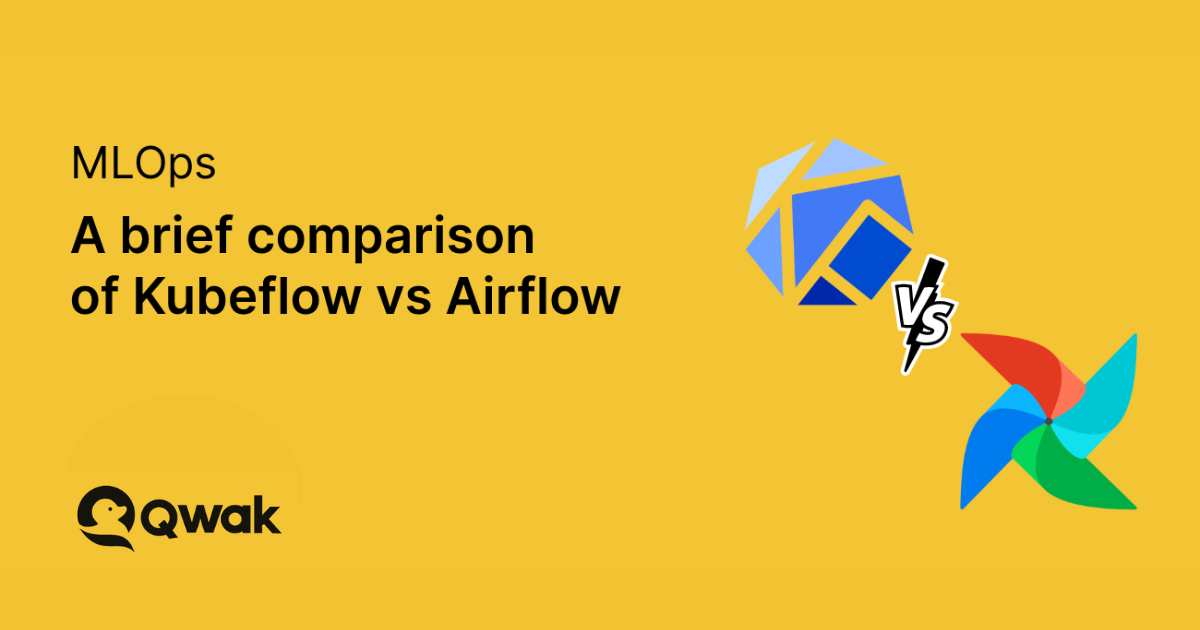 A brief comparison of Kubeflow vs Airflow

There has been an explosion in new technologies and tools for managing tasks and data pipelines in recent years. There are now so many of them, in fact, that it can be challenging to decide which ones to use and understand how they interact with one another, especially because selecting the right tool for your use case involves many factors that all need to be given due consideration.

In a series of new guides, we’re going to compare the Kubeflow toolkit with a range of others, looking at their similarities and differences, starting with Kubeflow vs Airflow.

In this comparison, we’re going to look at the main differentiators that will help you make a decision between Kubeflow vs Airflow. We’re also going to cover some of the common similarities that exist between the two.

Kubeflow is a free and open-source ML platform that allows you to use ML pipelines to orchestrate complicated workflows running on Kubernetes. It’s based on the Kubernetes open-source ML toolkit and works by converting stages in your data science process into Kubernetes ‘jobs’, providing your ML libraries, frameworks, pipelines, and notebooks with a Cloud-native interface.

The “Kube” in Kubeflow is derived from Kubernetes, whereas “flow” was chosen to distinguish Kubeflow from other workflow schedulers such as Airflow, ML Flow, and others that will be covered in later guides. Kubeflow works on Kubernetes clusters, either locally or in the cloud, which enables ML models to be trained on several computers at once. This reduces the time it takes to train a model.

Kubeflow is made up of many features and components, including:

Apache Airflow is an open-source application for building, scheduling, and monitoring workflows. Today, it is one of the most trusted solutions for coordinating activities or pipelines among ML teams.

Over the years, Airflow has evolved into one of the most powerful open-source data pipeline systems available. Initially designed as a flexible job scheduler, its use cases don’t end there. Airflow is also used to train ML models, send notifications, keep tabs on systems, and fuel a variety of API actions.

The most notable feature of Airflow is that it enables users to create workflows as Directed Acrylic Graphs (DAGs) of tasks, making it easy to visualize pipelines in production, monitor progress, and resolve issues with a robust UI. The tool connects to a variety of data sources and can send notifications to users through email or Slack when a process is completed or fails.

The main components and features of Airflow include:

Unlike Kubeflow, Airflow is solely focused on a single purpose, and this means that the Airflow components listed above are much lower level than those listed for Kubeflow.

Kubeflow and Airflow have many things in common. Similarities between the two toolkits include:

Although there are many similarities, there are fundamental differences deep down.

The main difference between the two is that Kubeflow was created by Google to organize its internal ML processes while Airflow was built by Airbnb to automate software workflows. As such, there are critical differences that stem from these differences in core purpose.

Kubeflow vs Airflow summed up

Kubeflow and Airflow are comparable insofar as that with both of them, you can build and orchestrate DAGs. In many ways, the similarities stop there. This means that choosing the best orchestration tool for the use cases can be quite difficult.

We hope that our brief comparison has helped you to make your Kubeflow vs Airflow decision and has provided you with a basic understanding of the key features and components of Kubeflow and Airflow.

Instead of using either of these, though, why not use a tool like Qwak?

Qwak is a robust MLOps platform that provides a similar feature set to Kubeflow in a managed service environment that enables you to skip the maintenance and setup requirements.

Our full-service ML platform enables teams to take their models and transform them into well-engineered products. Our cloud-based platform removes the friction from ML development and deployment while enabling fast iterations, limitless scaling, and customizable infrastructure.